May the Lord be in our heart, on our mind, and on our lips, that we may worthily proclaim his Word.

When the Sacred Scriptures are read in the Church, God himself speaks to his people, and Christ, present in his word, proclaims the Gospel. Therefore, the readings from the Word of God are to be listened to reverently by everyone, for they are an element of the greatest importance in the Liturgy. Although in the readings from Sacred Scripture the Word of God is addressed to all people of whatever era and is understandable to them, a fuller understanding and a greater efficaciousness of the word is nevertheless fostered by a living commentary on the word, that is, by the Homily, as part of the liturgical action. (General Instruction of the Roman Missal [GIRM], no. 29)

As a member of the liturgical team, the reader or lector reads the daily readings and prayers during mass and the parish announcements at the end of mass.  The lector is instituted to proclaim the readings from Sacred Scripture, with the exception of the Gospel. He may also announce the intentions for the Universal Prayer and, in the absence of a psalmist, recite the Psalm between the readings.  Lectors are an instrument through whom the people hear God’s Word. Lectors participate in the Introductory Rites, the Liturgy of the Word, Prayer of the Faithful and Concluding Rites of the Mass.

After the Collect, all sit.  During the Liturgy of the Word, the lector stands at the ambo and reading from the Lectionary already placed there before Mass, proclaims the First Reading from the Old Testament. At the end, the reader pronounces the acclamation The word of the Lord, and all reply, Thanks be to God.

After the introduction by the Priest, the Lector stands at the ambo and reads the intentions of the Universal Prayer during the Prayers of the Faithful.

After the priest says the closing prayer, the Lector reads the announcements.  During the Concluding Rites, the Lector processes out with the Eucharistic Ministers, Altar Servers and Priests during the recessional. 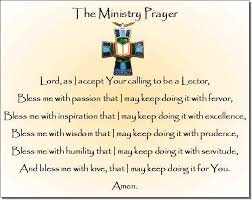 Is God calling you to proclaim His Word to the faithful?