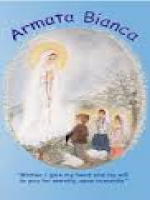 The Armata Blanca at Old Mission Santa Inés is a group of children who gather to pray the rosary.  Organized by Carolina Meraz, the group contains several sub-groups or nests.  Below is some additional information about the Armata Blanca organization.

It was developed on the ecclesial guidelines of His Holiness John Paul II with the battle for the defence of Life and the realization of the burial of babies victims of abortion for the first time in Aquila and then in the world. The standard bearers of the “victors” are the three children of Fatima: "Here the Woman clothed with the sun appeared Rev 12" John Paul II said on May 13, 2000, during the homily for the beatification of Francisco and Jacinta Marto. Thus he proclaimed to the world that the great confrontation between the Woman and the serpent which was foretold in Genesis began on earth on May 13, 1917 with the first apparition of the Blessed Virgin to Lucia, Francisco and Jacinta at Fatima.

The purpose of the Armata Bianca is to invite children to offer themselves to God and recite the Rosary so that Mary’s promise at Fatima may be fulfilled: "In the end my Immaculate Heart will triumph. I promise an era of Peace for humanity". However we cannot speak about peace by putting aside respect for life. Mother Theresa of Calcutta said: "Life is God’s greatest gift (…) the greatest destroyer of peace in the world is abortion. If a mother can kill her own child in the crib of her womb, who will be able to stop you and me from killing each other?"

All children in age and all those who are willing to become “little in spirit” by consecrating themselves to the Father, like Mary, in an unconditional "yes" to His Will.

"Unless you are converted and become as little children, you will not enter the Kingdom of Heaven" Mt 18,3. 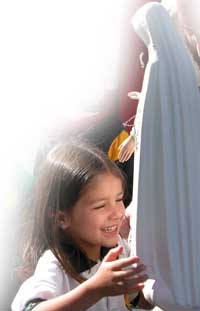 The Prayer Nests are made up of children who, following the example of the three Shepherd children of Fatima, get together to say the Rosary and, where possible, to adore Jesus in the Most Holy Sacrament. The first Prayer Nest is naturally the family, where the mother and father must nourish their children, not only with material food, but also spiritual food, passing on the faith to them with their example.

The word “nest” is used as it symbolizes a place where little birds are nourished and taken care of by their parents until they put on wings and are able to fly and provide for their own survival. The example of the birds represents the delicate and precious world of children who must receive help from their parents and educators in order to “grow and become stronger in spirit” (Lk 1,80) so that they can be free to fly in God’s kingdom. The “nest” is also a fountain, from which flows the “omnipotent” prayer of children who implore mercy for sinners and the fulfilment of the reign of love which we ask for each day in the Our Father.