The first serious commitment to the restoration of the Mission came with the assignment of a diocesan priest, Fr. Alexander Buckler, in 1904. Bishop Thomas J. Conaty directed Fr. Buckler to improve the Mission and send the invoices to his office. Fr. Buckler began by addressing the basic needs - better shelter, efficient water and drainage, and restoring the crumbling church. 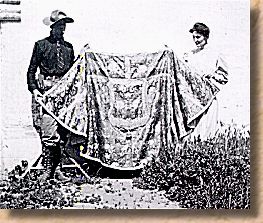 As the job proved daunting, Fr. Buckler invited his niece, Mamie Goulet, to live at the Mission and help in the restoration of priceless art, artifacts and vestments.

For heavy labor, Fr. Buckler began what became known as the Hobo Hotel. During the time before WWI, many young American and European men had come to California to make their fortune. Failing that, they wandered the unpaved roads and traveled on the railroads trying to survive. Fr. Buckler rehabilitated the remains of the old seminary in the garden into a few rooms and for their labor, provided the hobos with food, shelter and a blanket.

The system worked. Roofs were retiled, the reservoir system improved, the church interior restored. In 1911 after a heavy rain the bell tower fell. With the help of the residents of the new town of Solvang, the bell tower was re-built. Mamie Goulet served as housekeeper, nurse, carpenter, parish hostess, and painter. Additionally, she restored the vestments found lying in an old shelter and tried to restore many of the paintings.

Fr. Buckler retired to Santa Barbara in 1924. Together with his niece they moved to their house, named "Casita Santa Inés" and became parishioners of Our Lady of Sorrows church. He died in 1930, and was buried in a robe made from the remains of the repaired vestments that had been dyed black. The Mission was offered to the Franciscans but was declined by the Franciscan Father Superior. The offer was extended to the Capuchin Franciscan Order of the Irish Province and was accepted.