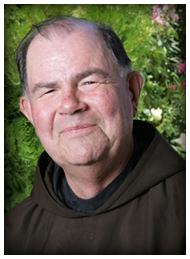 For Fr. James Johnson, interaction with the Capuchins was a family affair. “I was very involved at St. Francis High School in La Cañada, CA as a student, and my father was as well.”

Inspired by an early fascination with the life of St. Francis and his first followers, as well as with Fr. Junípero Serra and the California missionaries, after high school he joined the Capuchins in 1960, and was ordained to the priesthood at his family’s parish church, in South Pasadena in 1968.

After formation in the East, he returned to California and has worked in parochial ministry, formation ministry and teaching. “I have remained a Capuchin because I have always believed that it best resembles the life and character of Christ and his first followers and the gospel: down to earth, uncomplicated, with the people, in a simple, loving relationship with God and the gospel message. And, most importantly, I have remained a Capuchin because I believe it is God’s will for me.”